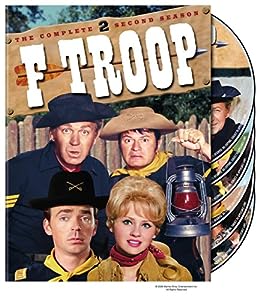 With so many available these days, it is wise to have a name you can recognise. The F Troop: Season 2 is certainly that and will be a great buy.

For this reduced price, the F Troop: Season 2 comes widely recommended and is a regular choice for many people. Warner Home Video have added some excellent touches and this equals great value for money.

F Troop is set at Fort Courage, Kansas, a fictional Army outpost in the West, in 1865, the year the Civil War ended. The commanding officer at Fort Courage is the gallant but chronically clumsy and accident-prone Captain Wilton Parmenter (Ken Berry), the descendant of a long line of military leaders. He is awarded the Medal of Honor after accidentally instigating the final charge at Appomattox: he is meant to call "retreat", but he sneezes just as he is about to speak and his troops mistake this for the order "Charge!" His superiors soon realize his ineptitude and post him to remote Fort Courage, a dumping ground for the least useful or trustworthy soldiers.

Yes, you are seeing double in F Troop's second, and final, season. In "The Singing Mountie," Larry Storch appears as Corporal Agarn and his cousin, a French fur trapper. In "Did Your Father Come from Ireland?" Forrest Tucker brogues it up as Sgt. O'Rourke's visiting Irish father. In "Wilton the Kid," Ken Berry gets into the act portraying klutzy, clueless Capt. Parmenter and his look-alike, a vicious bank robber. And in "One Russian Is Coming! Only One Russian Is Coming!" Storch again doubles up as Agarn's Cossack cousin. It's a sure indication that F Troop had indeed jumped the stagecoach (particularly the 1967 episode "That's Show Biz," featuring a frontier rock group, the Bedbugs, and a rendition of Bob Dylan's "Tambourine Man" that makes William Shatner's sound like the Byrds), but the show is so unabashedly old-school funny, and its ensemble of crack character actors so likeable, that one willingly takes the leap. During its brief run, F Troop spawned its share of catch-phrases (Agarn's "Who says I'm dumb" and "I'm warning you, Dobbs"), but this season's "Bye Bye Balloon" contains perhaps the series' most classic quotable, as the Hekawis' Chief Wild Eagle (Frank DeKova) gazes upon the mysterious flying object in the sky and proclaims, "It is balloon" (it plays better than it reads).

For a frontier outpost, Fort Courage sure saw its share of visiting show-business luminaries, including Paul Lynde as "The Singing Mountie," Harvey Korman as a Prussian balloonist in "Bye Bye Balloon," Milton Berle as sham medicine man Wise Owl in "The Great Troop Robbery," Sterling "Winnie the Pooh" Holloway as a bespectacled sheriff in "Wilton the Kid," and Vincent Price as a suspicious Count in "V Is for Vampire." One regrets the show's switch from black and white to color and the replacement of F Troop's original rousing theme song with an instrumental rendition (the original, with vocals, obligingly plays over each disc's menus), but the commercial-break freeze frames are fun. Tucker, as the entrepreneurial O'Rourke, and Storch, as his wildly emotional sidekick, are one of TV's great comedy teams, and Berry displays Astaire-like grace performing the bulk of the physical comedy. Those who dismiss F Troop as a mindlessly silly sitcom are directed to the near-half-hour series retrospective, in which military personnel salute this series' spoofing of military protocol and life as a morale builder during the Vietnam War. --Donald Liebenson

Go west.and go loco. Yes, Captain Parmenter and his buffoons in blue are ready again to untame the wilderness in TV's wackiest Western spoof. Wrangler Jane still pines after Parmenter, the Hekawis still plot after profits and Sergeant O'Rourke and Corporal Agarn have more get-rich-quick schemes up their regimental sleeves. A plains-load of comic guest stars joins the fun, including Phil Harris as